Since April 1, I’ve been a Richard E. Greenleaf fellow at the Latin American Library (LAL) at Tulane University. What have I been doing? This fellowship allows me to do library research on Honduran migration and gender-based violence. It’s been a great month checking out the collections at LAL and speaking to people who work with Latino communities in New Orleans.

I realized that New Orleans is home to a large Honduran community that has been here for many decades. Honduran migrants and Honduran-Americans talk about before and after Mitch waves of migration arriving to New Orleans. This coincides on what I’ve been reading on Honduran migration at the library. Hondurans have been migrating to the U.S. for decades, but patterns of migration changed considerably in the 1990s because of lack of job opportunities and Hurricane Mitch, which destroyed around 80 percent of the country’s infrastructure. Many Honduras had no other choice but to leave and the U.S. form of aid was giving Hondurans the Temporary Protection Status visa (TPS) to work in the U.S.

By the late 1990s, many Hondurans had a family member in the U.S., New Orleans was not an exception. I’m hoping I can meet and speak with more members of the Honduran community to get an idea of their experience in the U.S.

Aside from reading and downloading articles and reports that I do not access to back home (as well as getting to know this beautiful city), I also gave a talk at the University of Illinois at Urbana-Champaign.

(Flyer of my talk at University of Illinois Champaign-Urbana)

The wonderful Ellen Moodie -professor Dept. of Anthropology- invited me to talk about Honduran migration and so I flew up there to present some rough ideas based on what I have been reading at LAL and previous research done on Honduran migration. 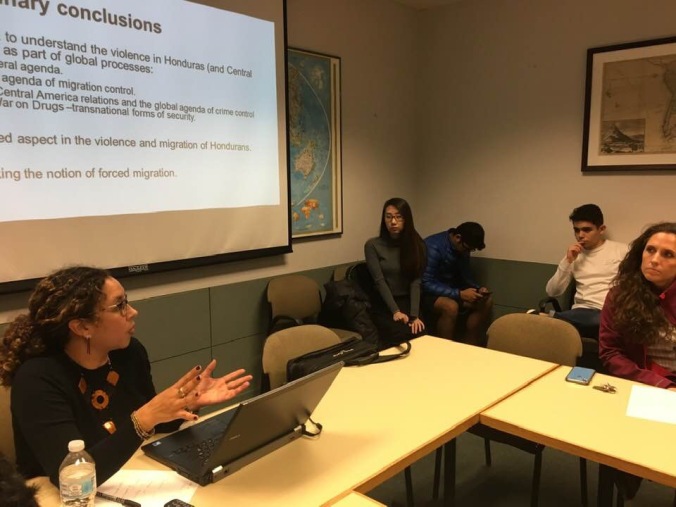 (Foto by Ellen Moodie; me left).

I spoke about the global processes involved in the migration of Hondurans principally to the U.S. (many Hondurans are migration to Spain). Hondurans leave because of violence ad crime, yes, but this needs to be understood within larger global processes. Poverty, inequality, violence, crime are not essential to Honduras or Central America.

This year, the idea is to develop these ideas into a book on Honduran migration.