The city is an unsafe place for many women. This is what I often heard from activists  of  the women’s grassroots organizations in Medellin, as well as civil servants working at the Secretary for Women. According to a recent local news report, 40 women have been killed so far in 2017 Medellin simply because they were women.  40 femicides so far.

I remember speaking to one of the activists of the Mesa de Trabajo de Mujer de Medellin. She told me in May that femicides had gone up in Medellin, and yet no one was talking about it. “[Femicides] are an invisible topic, especially for this administration. They talk about capturing narcos, drug traffickers and yet they ignore completely the fact that women in this city are being killed and that these femicides have gone up.”

Violence against women and femicides are a serious problem in Colombia. According to the Colombia Legal Corporation website, from 2002 to 2009 there were 627,000 cases of mistreatment towards women. 11,976 women involved in those cases were assassinated. These numbers are staggering.

(Source: Economic Commission for Latin America and the Caribbean)

Violence against women and femicides are serious problems in Colombia, Central America, and Latin America. Invisibilizing it makes it worse, for women of course.

This week – 1-3 November, 2017, the National Colloquium on Gender Studies will take place in the University of Caldas in Manizales, Colombia. It will be an interesting event with international and national experts of gender in Latin America.

This Friday October 20th, 2017 is the deadline to receive abstracts for this panel on inequalities and violence in the city from a gender perspective.

I’m co-orginizing this panel with Dr. Frank Müller.  We receive abstracts in Portuguese, Spanish, and English.

This week, the subject was gender and international relations. Instead of giving the classic lecture on gender theory and international relations, or discussing the assigned reading, I decided to invite Gloria Moncada, a public servant working at the Secretary for Women in Medellin and responsible, among other things, for executing and supervising projects on gender mainstreaming within the state institutions of Medellin.

I think it is better to grasp the complexity of international treaties that states sign and ratify (for instance, gender equality or gender mainstreaming) by listening to the first-hand experiences of someone within the state institution attempting to execute these agreements through projects.

How does it work? What obstacles do public servants at the Secretary for Women encounter?

Gloria Moncada gave an excellent presentation to my students about Gender and Development and how it translates into the many projects carried out by the Secretary for Women. Despite international agreements signed by the Colombian state to implement gender equality and gender mainstreaming through varios development programs on the local level, the Secretary for Women have encountered various obstacles such as: coordination and competition with other local state institutions or the negligence in some institutions to separate some data and censuses by sex. Because of this, gender inequality in some areas is invisibilized.

How do you change something unknown? 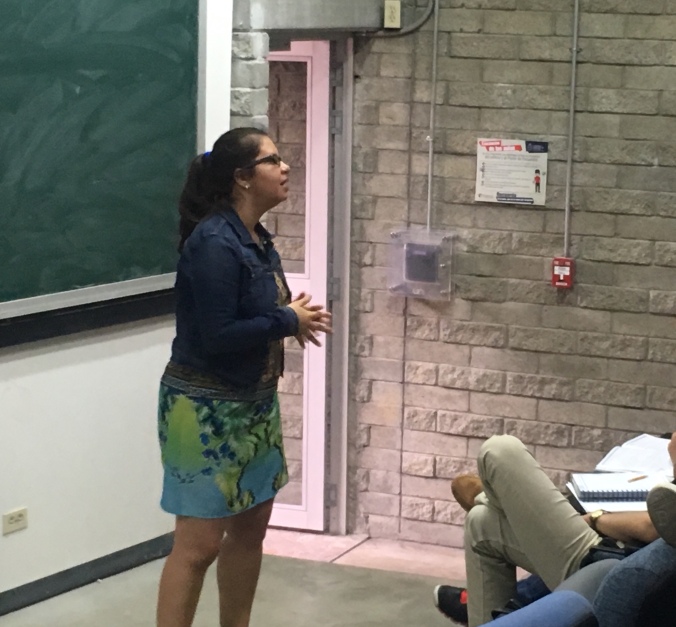 Gloria not only spoke about the struggles of mainstreaming gender within state institutions in Medellin, she also spoke about gender violence -a pandemic in Medellin – the influence of armed actors on local planning initiatives, and the impact of the privatization of social services on gender. In these three cases, gender inequality is accentuated, and women are the most affected.